Be the first to know!

Local Manufacture Signs Statement of Support for the Guard and Reserve 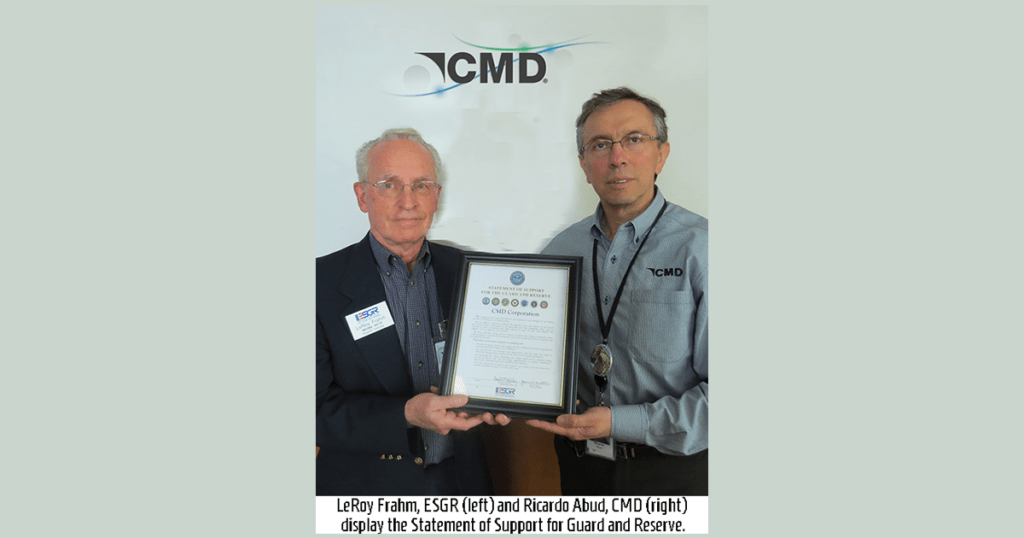 “The statement of support fits very well with our beliefs and culture at CMD,” says Abud. “We are fortunate to have the honor to hire veterans and have many on our staff. We support all they do to protect our communities and welcome our employees back when they return from service.” He explains that recently the firm’s current Business Development Manager for CNG was deployed to Afghanistan, and that a plan was worked out to find temporary fill-ins while he was gone, but to welcome him back fully to his position when he returned more than a year later.

“We were thrilled when we were able to receive word from him while he was deployed and overjoyed when he returned. We are very proud of him and the service he has provided,” says Abud.

According to LeRoy Frahm, Ombudsman Director of Wisconsin Chapter of Employer Support for the Guard and Reserve, Supportive employers and supervisors are critical to maintaining the strength and readiness of our nation’s defense. “Nearly half of our nation’s defense is in the National Guard and Reserves today,” says Frahm. “By signing this Statement of Support, CMD Corporation joins other prominent employers in the Fox Cities, both large and small, recognizing and supporting our country’s service members,” says Frahm.

About Employer Support for the Guard and Reserve

ESGR, a Department of Defense program, was established in 1972 to promote cooperation and understanding between Reserve Component Service members and their civilian employers and to assist in the resolution of conflicts arising from an employee’s military commitment. ESGR is supported by a network of more than 3,750 volunteers in 54 committees located across all 50 states, the District of Columbia, Guam-CNMI (Commonwealth of the Northern Mariana Islands), Puerto Rico, and the U.S. Virgin Islands.

About CMD:
CMD designs and manufactures high-performance converting equipment for the blown-film and flexible package converting industry, and CNG equipment for natural gas fueling stations. CMD equipment is designed and manufactured in Appleton, Wisconsin, USA and backed by a global network of associates and experienced, in-house service technicians and parts specialists.

Be The First To Know